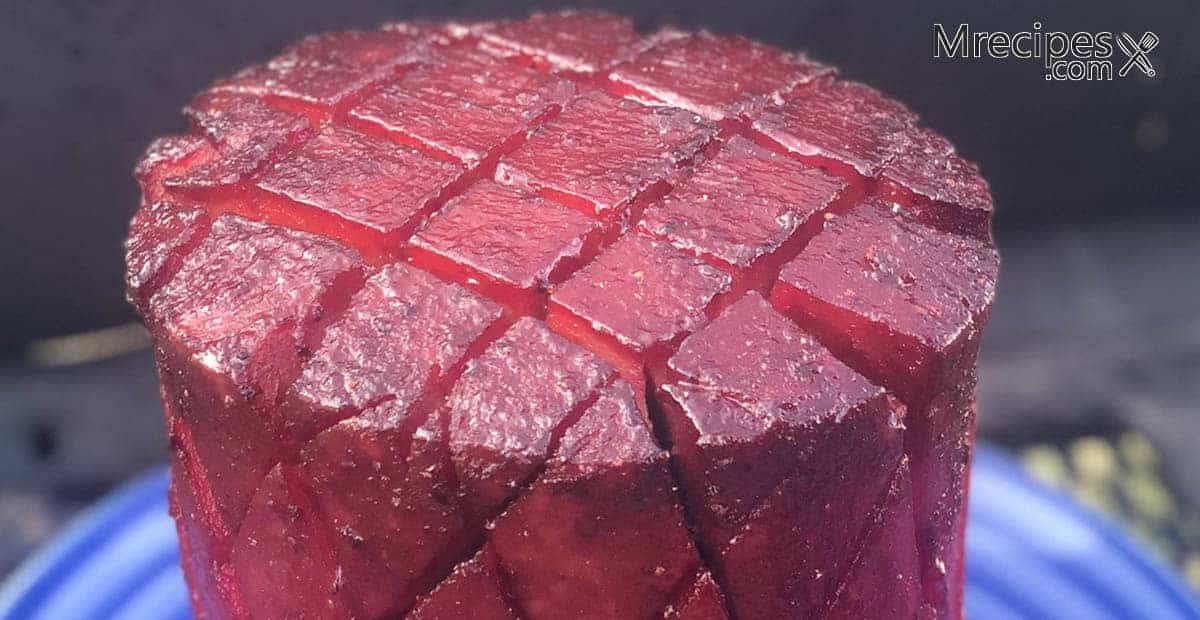 There is something about rolls of pre-cooked, ground, well seasoned meat that we love, even if we don’t admit it. These are salty, yummy, affordable, special treats. One of the most popular foods in Hawaii is cooked pressed meat. You know what I am referring to. New Jersey is famous for pork roll. These wonders of the meat world were staples in the 1950s and they are still front and center in the prepared meat and deli sections of the grocery store.

Back in the 1960s and 1970s it became really acceptable to take a prepared meat product, glaze it, bake it, and serve it as an entree. College students often embraced this as an affordable main dish protein for a group dinner. It was what ramen noodle soup is today for those on a budget.

I remember scoring a roll of meat in a diamond pattern, pouring some maple syrup over it, placing cloves in the diamonds, and baking the roll until it had a sweet, crunchy skin. This included bologna. When you go to the store to purchase a bologna for the recipe described here, ask for a whole roll. It likely won’t be displayed as such. You may have to call ahead and order one.

What Exactly is Bologna or Baloney

Bologna is named for the city of Bologna in northern Italy (Sometimes called baloney). In the U.S. it is familiarly referred to as baloney. The Italian city has a version of this that they call mortadella. However, mortadella contains bits of solid fat that give it a distinctive spotted appearance and rich, creamy texture. Some mortadella rolls may also have pistachios.

Bologna may be a mystery to many of us. I like to think of it as a giant hot dog. And like a hot dog, the ingredients, and the quality of same, all depend on who made it. The meat can be beef, pork, veal, or chicken, and often is a combination of these meats. Bologna can also have offal, such as liver or heart.

In addition to the meat, bologna contains a blend of spices, notably salt, pepper, celery seed, coriander, paprika, and sugar. Myrtle berry is often added to the recipe. Some bolognas contain nitrates or pink salt to preserve them. If you have access to a local sausage shop, you may be able to find some handmade, artisanal bologna. These shouldn’t have any unnecessary fillers, such as wheat or corn flour, or preservatives.

To make bologna, the meat and spices are emulsified and churned into a smooth paste. The mixture is generally wrapped in a casing that is usually made from the gastrointestinal tracts of hogs, cows, or sheep. The encased roll is then smoked to cook, just as you might do with sausage. However, I have seen bologna rolls that were cooked under the pressure of steam, and then lightly smoked.

Bologna is most often served sliced thinly and cold or at room temperature. It is a common sandwich component. Because it is a cured or smoked meat it can withstand the environment of a school lunch box for a few hours without spoiling. A popular lunch sandwich is 2 slices of white bread, mustard, bologna, and American cheese slices.

My grandmother loved bologna and would fry it before placing it on my sandwich. I totally loved the slight crispiness of the edges of the fried bologna. And, I enjoyed that is was hot and moist. The cheese would melt just enough. There was nothing bad about a fried bologna sandwich.

Smoking a whole bologna is a fantastic way to cook it that imparts a depth of flavor that is hard to describe until you try it. So, let’s look at an easy recipe for a smoked bologna in a Masterbuilt Electric Smoker.